Interview: Ed Wrenbeck from Vectorform predicts that beacons will become part of everyday life in a few years. 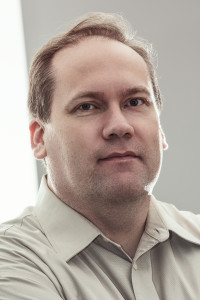 „Beacons will just become part of everyday life, incorporated into everything we do, and we won’t even remember what life we was before we had them“, Ed Wrenbeck promises. He leads the iOS development team at the technology and strategy company Vectorform. Beacons are based on Bluetooth low energy (BLE), which are going to be standard for everyone just like smartphones are right now. Apple has already installed beacon devices in all stores in the U.S. In addition clubs of the Major League Baseball (MLB) provide fans in their stadiums with iBeacon, helping them to find the quickest way to get a refreshment. But Wrenbeck also knows that „the beacon industry is still pretty young“. Retail Companies still seem to focus on offering coupons and in store activations to push products. He predicts at the end of 2014 and the beginning of next year, there will be more customer interactions. Wrenbeck himself has got a beacon transmitter in his own office, so his associates know that he is there or not. This example shows that beacons have already become part of every day life for early adopters.

Location Insider: First of all: What is the difference between BLE, iBeacon and beacons?

Ed Wrenbeck: It’s pretty common to talk about BLE and beacons as one in the same, and I do want to clarify that iBeacon is a system running on top of BLE, they are not quite the same thing. iBeacon is predicated on a broadcast and receiver model, where BLE supports bi-directional communication.

Location Insider: How are you working with beacons at Vectorform?

Ed Wrenbeck: The range of interest in using beacons to enhance experiences is astounding. Here at Vectorform we are working with a wide variety of customers on implementing beacons including automakers, toy companies and retailers. For our projects, we have primarily been using the Series 20 beacons from Qualcomm, who has been a great partner for us. We’ve been working on projects related to beacons for the better part of the last year and we’ll finally begin to see the realization of those projects in the next few months. The beacon industry is still pretty young and not all beacons are the same and a beacon is not necessarily compatible with Apple’s iBeacon technology. It’s taken some time to flesh out the possibilities and the realities of beacons to determine what are the best user scenarios to apply this technology to.

Location Insider: Did you take special advantages of it?

Ed Wrenbeck: For Vectorform, we approach beacons as a tool we can use in our projects to improve the user experience and enhance the relationship between the customer and the brands we work with. We spend quite a bit of time testing various scenarios to determine how we can take a solution from an idea in our lab and turn it into a product for the brands we work with. We’ve deployed a bunch of beacons all over the office. Right on my desk, one of the engineers on the team marked out a square on my desk with colored tape and I have a beacon I keep in that square. Anyone can tap into that beacon and others in the office to test out a micro location idea or a game scenario or who knows what else. I think someone even uses the interference I generate blocking the beacon so they know when I’m at my desk since I can be hard to track down sometimes.

Location Insider: How common are beacons in the US?

Ed Wrenbeck: In 2013, beacons hadn’t really spread into everyday consumer life in the states. That began to change at the end of last year and in the first quarter of 2014. The most prominent example here is of course the Apple stores, which deployed their beacons last year. Now we have major sports stadiums and a growing list of retailers implementing beacons. One of the key obstacles to deploying iBeacons is the requirement for the user to have an app installed to work with the beacon. This is relatively easy for Apple, where a good portion of the Apple Store visitors have the Apple Store app already installed. Similarly, an organization like Major League Baseball can influence their fans relatively easily. Many retailers, even what some would call premier brands, are finding it more difficult to get customers to install the app they need to communicate with the beacons. We are seeing some companies, like shopkick, that are trying to solve this problem by aggregating multiple retail brands together in a single experience. I still see this as the fundamental problem preventing pervasive deployment here in 2014.

Location Insider: What is going to be the area of life which will be most affected by beacons?

Ed Wrenbeck: Beacons are ultimately going to be tools used to add more convenience to the activities we already do. Where they will be most effective is when they are used to deliver information that is most relevant to our time and location. In retail it might be product reviews, in a stadium it might be routes to key locations and at a conference it might be second screen experience enhancing a presentation with speaker bios and reference material. In all of those cases, it took information that already existed or could have existed and presented it to the user in a time and location relevant way.

Location Insider: Vectorform tweeted on April 2nd: „Location as the key to the customer.“ What can retailers achieve by integrating beacons in their stores or even in whole shopping malls?

Ed Wrenbeck: Many of the early beacon implementations are and will be focused on delivering targeted offers to customers based on relative location. More successful efforts will be to use beacons to create a more meaningful interactions with the customer. In a mall, it might be to provide a walking time calculation or helping a user create the optimum route in the mall. Major League Baseball is using iBeacon for that type interaction, helping fans find the quickest way to get a refreshment. For Vectorform, it’s critical that we help our clients engage their customers in a meaningful way. We are less interested in using beacons to push promotional messages. The focus for us is how can beacons work with other technology in the mobile and wearable space to deliver information that is relevant and timely to the user based on their current location and their known preferences.

Location Insider: „Vectorform’s mission is to create the next iconic experience.“ How does Vectorform experiment with beacons?

Ed Wrenbeck: Vectorform has a culture of experimentation. When a new technology becomes available, such as beacons, we bring it into our labs and start dissecting what we can do with it. We create prototypes of more generic ideas. When our clients comes to us, sometimes months or even years later with a problem, we begin going through the inventory of ideas we have mapped out. With beacons, we’ve already tested out scenarios with micro location, second screen, time and location messaging to even further edge cases like beacon interference patterns and directional beams. At some point, a customer will bring us a problem that seems impossible to solve we will apply this technology in a completely unexpected way. I think the mission to create the next iconic experience is in many ways mission impossible. When technology is at its best is when it blends in and completely changes the behavior of the user and simply becomes part of the person’s lifestyle while operating below the conscious level.

Location Insider: BLE vs. NFC: Which one is winning the fight?

Ed Wrenbeck: In 2013 is was a fairly automatic response to think of iBeacons and beacons in general as an alternative to NFC. This was mainly because many of the use cases that were first imagined for beacons evolved from what was developing with NFC. In practice, they are quite a bit different. NFC shines as a direct peer to peer interaction between two devices, where one is typically a mobile phone, usually at a range measured in centimeters. The prototypical NFC use case involves facilitating a transaction, such as replacing a credit card. With beacons, the range of influence is measured in meters. More importantly, the mobile phone doesn’t negotiate a transaction with a beacon, it’s effectively a one way street where the phone is taking information from one or more beacons and then self determining what action should be taken in response to that information. To answer your question, In the United States the fight ended before the first blow could land. Apple has never supported NFC in the iPhone and the iPhone still has a major share of the smartphone market here and an even greater mindshare. Most merchants have been waiting on the sidelines with NFC until Apple’s move was made. I’ve never walked into a store in the US and personally experienced an NFC transaction. Because I’m an iPhone user, I asked some of the Android users here in the office what experience they have making an NFC transaction to round out my answer to this question and I couldn’t find anyone who had.

Location Insider: 370 million mobile phones will be sold with BLE this year. What can we expect from beacons in 2014?

Ed Wrenbeck: In 2014 beacons will be focused on retail experiences and events. With regards to retail, all of the focus seems to be on offering coupons and in store activations to push products and we hear very little about how the technology can be used to improve the way customers interact with a brand. Unfortunately, I think that will continue to be the case for 2014 until the more visionary retailers begin to demonstrate how beacons can create new types of customer interactions. At the end of the year and moving into 2015, as stories begin to evolve into how beacons fundamentally changed how users experience brands, we’ll see that begin to change. Apple is very much leading the charge with this. Every Apple store in the US now has beacons deployed. When you approach an area of the store, such as the section where they sell headphones, you are given information relevant to that topic such as product reviews and customer ratings. Since you are near the headphones, it’s very easy to select which headphones you decided to buy and pay for them right in the Apple Store app without ever engaging with a customer service representative. It’s now possible to walk in, make a purchase and walk out of the Apple store in as little as a minute without engaging with a store employee at all while feeling like you made an informed decision on your own terms. I turn to my search engine at least ten times per day, I can’t even imagine how I was able to accomplish anything before I had this tool. I think a few years down the road we will see a similar thing with beacons. They will just become part of everyday life, incorporated into everything we do, and we won’t even remember what life we was before we had them.

Location Insider: Thank you for the interview.